This website contains links to and discussions of published (and unpublished) research into apithological systems theory and praxis. The publicly available materials for this field are rarely seen with most of the research work being centralised within its community of discourse.

Research in the field of apithology commenced in 2004. The origins of this work began in the context  of generative conversations regarding humanity-scale problems and prospects. Within existing discourses there is a strong emphasis on problem solving by identification of domain specific absences. The field of apithology was generated to consider the prospects of humanity by considering instead a solution orientation to trans-disciplinary presences.

Essentially, apithology theory (and its related modes of praxis) consider generative dynamics in humanity-level contexts. These are applied pragmatically to the possibilities for generative change within individual-level practice areas across fields of significant diversity.

The unusual premise of apithology research is that the development of collaborative insights requires the confirmation of multiple disciplines within a common discourse. Consequently, apithological research and inquiry occurs within an established discourse and simple practices of inquiry. This allows for peer-developed findings to be incorporated into peer-development processes which then generate the development of the community of research practitioners itself.

This web-portal brings together an indexing of a small portion of the publicly available research resources in this field. The four primary sources of these resources are: 1) Aspects of Apithology: The Journal of Apithological Practice  (Volumes 1-5) (2008-2014); 2) Published Conference Papers and Proceedings (2008-); 3) Academic Peer-Reviewed Journal Articles (Various); 4) Ancillary Publications, Books, Thesis Dissertations, and Reports.

Links to these resources are by their original locations (preserving copyright and subscription rights). Copies of original versions are available directly from their subscription sources and the paper authors directly. 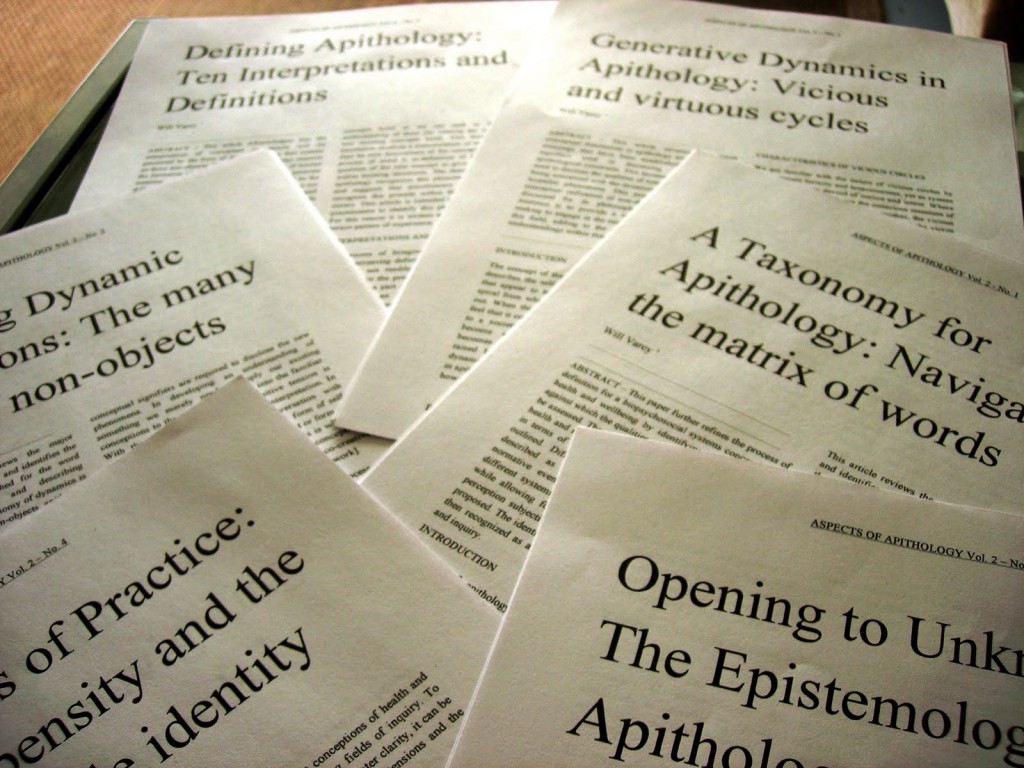 A new research paper on Apithology theory will be presented at the 59th Meeting of the International Society for the Systems Science in Berlin (August 2nd-7th, 2015).

The paper is titled: The Apithology of Humanity Psychology: Humanity as a Generative System. This is the fifth paper on apithology published in the Proceedings of the Society (i.e. 2009 Brisbane, 2010 Waterloo, 2012 San Jose, 2013 Hai Phong).

The importance of this paper is three fold, being described as: “The contribution of significance made by this paper is to comment on global health from a different premise (i.e. generative paradigm), at a different scale (i.e. humanity-scale), for a different purpose (i.e. future enablement).”

This significance of the paper to the Apithology community includes the following novel contributions:

The paper defines what this approach enables by way of its proposed emphasis. One point of guidance in the paper reads:

“It is already recognized that a natural unfoldment of complexity may lead to systemic vulnerability (Holling, Peterson, & Allen, 2008). At the same time there is, in each same moment, the possibility for the formation of generative potentials. For this reason, instead of being a tool for predictions of collapse, stagnation, or transcendence the vital work of apithology theory is to actively provide for the presence of the capacities for generative enablements. The places that request this are anywhere the potential for humanity’s aspirations may manifest.” (p. 16)

This recognition, of the moment by moment opportunity for the generative (and the practical means of the realisation of the potentials then generated), is perhaps apithology’s main contribution to contemporary knowledge and philosophy.

The paper concludes with this pronouncement:

“For those interested in a humanity-scale generative inquiry for the enablement of future potentials, rather than the remediation of individual problem-level situations by the repetition of past incapacities, there is now a premise, practice and pathway.” (p. 19)

We can understand by this quote how the questions we have, will guide what we (must) pay attention to – and how this suggests a deeper inquiry into how our forms of attentiveness, might be best informed.